Did you know that San Diego uses 500 million plastic bags every year? And what’s even more shocking…less than 3% of plastic bags are recycled in California. While there are lots of discussions regarding plastic bag bans and ordinances, until we can cut down on our plastic bag usage, let’s talk more about recycling them!

Some background about bans:

There has been much debate recently, both locally and at the state level, regarding plastic bag bans. At the state level, State Senator Alex Padilla is looking to reintroduce legislation that would keep grocery stores and pharmacies from providing customers with single-use plastic bags by July 1, 2015. If this legislation passes, it would make California the first state in the country to ban plastic bags. Locally, San Diego City Council is also looking to vote on a citywide single use plastic bag ordinance later this year. Supporters of such bills argue too many plastic bags end up as litter or take up space in landfills since few of them are recycled. Of the 14 billion plastic bags that Californians use per year, very few of those are actually recycled. Instead, they end up in landfills or as litter on the side of roads and on beaches! But that isn’t to say that there is no market out there for plastic bags.

The skinny on recycling plastic bags:

Many of you may already know that plastic bags do not belong in our curbside recycling. However, we are often asked why we can’t simply put plastic bags in our bins at home. The answer: recycling facilities are set up to separate rigid plastics from other recyclables- paper, aluminum cans, and glass. Current recycling machinery is just not set up to sort plastic bags and film; they would just get tangled in the equipment.

Although plastic bags cannot be placed in curbside recycling bins, they can be recycled. Many grocery stores collect plastic bags, usually placing bins near the front entrance of the store. In fact, many of these stores also take other types of plastic film, such as produce bags and plastic packaging film. Returned plastic bags are then sent to a recycling processor and are turned into different plastic products such as composite lumber, pallets, crates, and pipes. 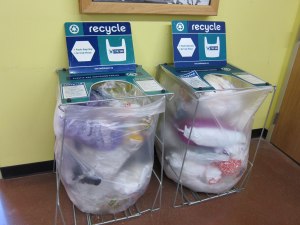 If you need help finding a location to take your plastic bags, check out our handy recycling database, www.WasteFreeSD.org! 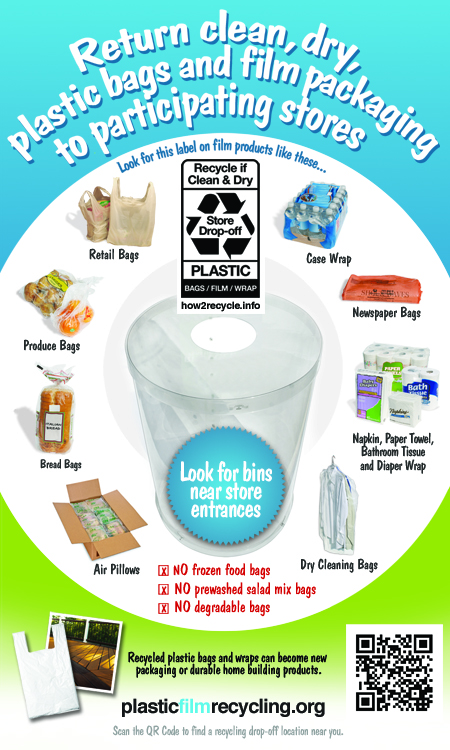 10 thoughts on “Plastic Bags. Are they recyclable?”